I.e. creating a consumer product brand required large capital, and therefore was not something that new and emerging entrepreneurs without access to capital could aspire to do.

Xiaomi just debunked that theory with a model execution of a creative & unconventional strategy.

Without opening a single store, without keeping the products on shelves in physical stores, without spending on advertising, this China-headquartered company has already become the world’s 3rd largest handset manufacturer in just under 3 years time since launch.

It is reportedly seeking USD 1.5 billion in fresh funding. If that comes through, it could value the company at over USD 40 billion. i.e. twice the valuation of Sony and Lenovo.

There are some significant lessons to be learnt from this handset-seller that calls itself an e-commerce and mobile Internet company and does not like to be called a handset-maker. How does a company that bypasses retailers and sells directly to consumers redefine the consumer retail business?

Xiaomi plans to open consumer ‘experience’ centers, which will be their service centers where consumers can go not just to repair & service products, but can also experience the next set of Xiaomi products.

In a market like India, this means that distribution power is no longer a competitive advantage. And that’s a significant change in the market dynamic.

Additionally, exclusivity with Flipkart also meant that they got front-page on the site and support in  promoting it via newsletters, etc.

The learning for me is that with the support system around doing business getting more organized, tech-enabled and much more professional than before (certainly in India), it is possible for companies to have lean structures with high-quality talent that can bring the various service providers to work in sync. The traditional organization structures of layers of people, instructing what is to be done and then supervising it are no longer required.

The most important lesson for me is that  – it is possible to launch a consumer product brand with little or no capital. And that opens up the opportunity to every entrepreneurial-minded individual who wanted to start a consumer product company but did not think he/she had the capital required to convert that dream into a company. Outsourcing production, leveraging online infrastructure, efficient management of service-providers and content-based social media use can help you launch a brand with a very limited capital.

This article was originally published in IamWire. Click here to read the full article.

Prajakt Raut is the founder of Applyifi.com, and author of the book for startups - ‘Starting Up & Fund Raising’ Prajakt personal goal in life is to encourage and assist a 100,000 people to become entrepreneurs. _____________ Prajakt is the founder of Applyifi - an online platform that provides startups a 36-point scorecard and assessment report on the venture's investment readiness [www.applyifi.com], and helps them improve their odds of getting funded. Prajakt is also the founding partner of The Growth Labs, a platform where growth-stage companies get sharp, incisive advice from senior professionals and experienced entrepreneurs. [www.thegrowthlabs.in] Before starting Applyifi, Prajakt was the head of operations at IAN, founding member of a leading incubator, and the Asia-Director for TiE (2004 - 2007). Previously Prajakt had co-founded Orange Cross, a healthcare services company, and was part of the founding team member of Idealake Technologies. While in college Prajakt had founded a printing business and has spent over 10 years working in leading advertising agencies. Prajakt’s book, ‘Starting Up & Fund Raising’, helps startups understand an investor’s perspective, and helps them improve their odds of getting funded. The book also helps entrepreneurs understand the building blocks of a business. View all posts by Prajakt Raut 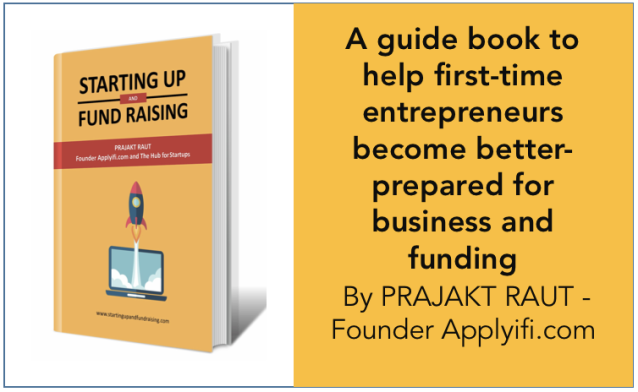 Presentation on scaling up